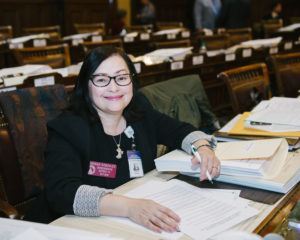 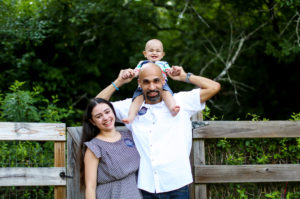 Deborah’s daughter Angelica, her husband Al, and the infamous Zander.

Representative Deborah Gonzalez, HD117, is an attorney, mother, and advocate for social justice. Her work in the legal field covers media, technology and entertainment through her legal firm D Gonzalez Law Group, LLC and Letterbox Legal. She won her seat in a special election in November 2017 and gained national media attention (thanks to a shout out by Michael Moore on CNN) by flipping the seat blue despite being outraised 4 to 1 by her opponent.    Her legislative work includes protection of children (health, education), working families (livable wages, non-discrimination), and victims of sexual harassment, domestic violence and other forms of abuse. She is a published author, most recently of “Managing Online Risks: Apps, Mobile, and Social Media Security.” Deborah comes from a military family (army). 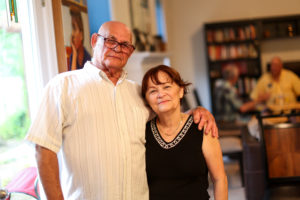 Rep. Gonzalez is currently on three committees: judiciary non-civil, code revision, and intergovernmental coordination.  Due to her 2018 committee work Rep. Gonzalez was appointed in May, 2018 to be the Vice Chair of a national task force on Law & Criminal Justice for the National Hispanic Caucus of State Legislators. Rep Gonzalez distinguished herself as a freshman legislator by defeating a bad bill with her opposition speech on cross-over day, not once but twice.  She also earned the nickname “the cross examiner” due to her provoking and thorough questioning during committee meetings.

Rep. Gonzalez governed with a few guiding principles: transparency, communication, and accountability – remembering her job is to serve the people of her district. Did a bill provide positive benefits for her constituent, for all Georgians?  Were there any possible unintended consequences because of the bill?  How can we build coalitions to ensure good and necessary laws are passed? 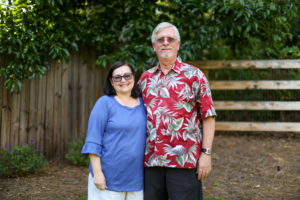 Deborah and her husband Bob.

Rep Gonzalez has made herself accessible and is often spotted out and about the District participating in different community events and listening to community members about there concerns and needs.

On the personal side of life, Rep. Gonzalez’s husband is Dr. Robert (Bob) Scott, professor at UGA.  His expertise is in chemistry, but his passion is data. So for Bob, facts matter.