Hello HD117.  This was the last week of the Legislative Session.  The session has been long and quick at the same time. I’ve learned so much and am so grateful to have been elected to serve YOU. 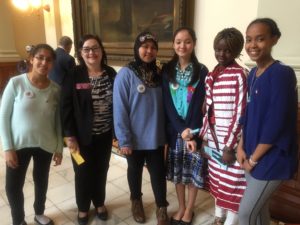 Welcoming students to the Capitol is always a highlight.

Monday, March 26, 2018. There was no session today as most legislators were getting prepared for Tuesday and Thursday. I spent most of the day in the District and had dinner with Bob and his sister before heading to Atlanta for the week. 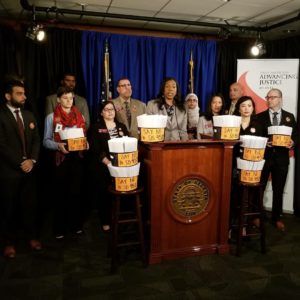 Tuesday, March 27, 2018. Day 39. A few things happened before the day session even got started.  I was part of a press conference voicing concern and opposition of SB452 (anti-immigration bill, https://bit.ly/2FrWPyH).  It was organized by the Asian Americans Advancing Justice (https://www.advancingjustice-aajc.org) and included speakers from various organizations and Representatives Bee Nguyen, Pedro Marin, and me.  Two of those organizations were the Georgia Association of Latino Elected Officials (GALEO, http://galeo.org) and the Southern Center for Human Rights (https://www.schr.org).  You can view the entire press conference here: https://www.youtube.com/watch?v=NFRLjvz4EmY. 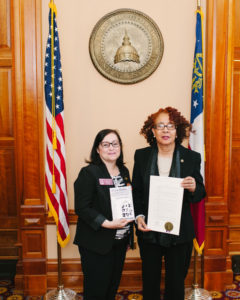 After the press conference I got to meet Marsha Washington George (https://www.linkedin.com/in/marsha-george-868414a/), a black radio historian who wrote “Black Radio…Winner Takes All: America’s 1stBlack DJs.”  She was an invited guest of Rep. Valencia Stovall.  Considering the amazing black radio history of Athens, it was an honor to take a photo with Ms. George. 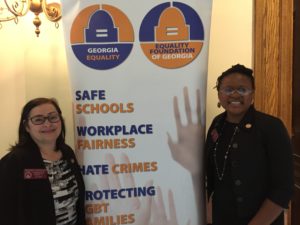 Lunch was divided between the Democratic Caucus and Georgia Equality (http://georgiaequality.org).  I really enjoyed the mini-exhibit GE had – between photographs and illustrations, the images and their messages left me inspired. Which was a good thing, as right after that all the Representatives and Senators lined up outside the main steps of the Capitol with Governor and Mrs. Deal to receive the body of former Governor Zell Miller, which was to lie in state Tuesday and Wednesday.  It was a moving and somber moment when the hearse pulled up and although I did not serve while he was Governor, I am grateful for his legacy of the Hope and Zell Miller scholarships.  Some facts about his life can be read here: https://on-ajc.com/2uet7YL. 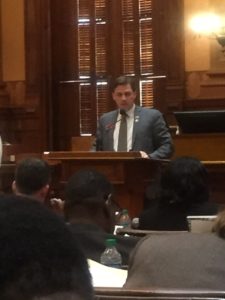 Legislative Day 39 had a lot on our plate.  We did not end until after 11:30 pm.  The House kicked off by unanimously passing two adjoining bipartisan measures, Senate Bill 127 (https://bit.ly/2uEkGGh) and Senate Resolution 146 (https://bit.ly/2uLb4Kf), legislation that would acknowledge and protect several specific victims’ rights (also known as Marsy’s Law).  We also passed Senate Bill 154 to hold those in positions of authority accountable for sexual assault by defining sexual assault in the first and second degree.  We also unanimously passed the last criminal justice bill under Gov. Deal’s administration. Senate Bill 407 (https://bit.ly/2H0WTD3) consists of several recommendations from the Criminal Justice Coordinating Council, and this comprehensive measure notably includes updates to Georgia’s bail system

During the late afternoon and evening we debated various contentious bills including SB315 (computer hacking bill, https://bit.ly/2pXpl0z) and SB263 (creating the city of Eagle’s Landing through de-annexation,https://bit.ly/2pmolTx).   Representatives Wallace, Willard, Douglas, Boddie, and Minority Leader Trammel spoke against these bills eloquently and with conviction.  Disappointingly, both of these bills passed. 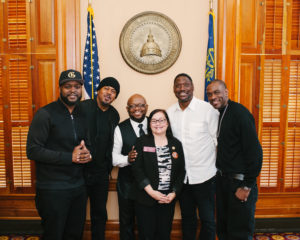 Wednesday, March 28, 2018 was a committee day.  I was told that there had been a few sessions where day 39 and 40 were right after each other, but that proved too much for the staff.  Why you may ask?  Well remember those photos I’ve put on Facebook of the stacks of papers on my desk every morning?  The staff is in charge of getting all our binders updated with those papers – that includes making copies, getting the binders updated, getting rid of old calendars, etc., etc., etc.  They usually do this after we leave and finish before we get in.  Well if we finish at 11:30 pm or midnight, that doesn’t leave them much time and they usually ended spending the night working and going 36 + hours without sleep.  So I for one am grateful for all they do to have my desk ready for my day and that they got a bit of sleep. 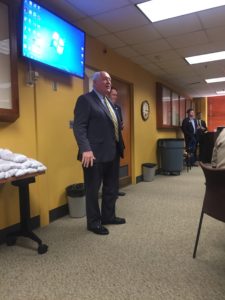 This “between” day still had things on the schedule including the last Rural Caucus meeting of the session. We had a special guest – Sonny Perdue, US Secretary of Agriculture and former Georgia Governor (https://bit.ly/2uH4b79) – who was in town to attend Zell Miller’s funeral.   Secretary Perdue gave an interesting presentation and emphasized how important it was to have broadband and Internet access for the agricultural industry.  I asked him about how we can ensure that Internet access would be affordable and accessible to all considering the repeal of net neutrality?  His answer was that access and affordability need to go hand in hand and he did not believe the carriers would raise their prices too high because of competition. I am not as sure as he is about that (https://bit.ly/2jdD9Ax). 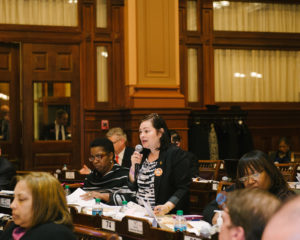 However, we did pass House Resolution 1698 (https://bit.ly/2JdLDEe) and Senate Bill 426 (https://bit.ly/2pV5DDg). HR1698 urges the House Rural Development Council (RDC) to examine how to best spur economic growth throughout rural Georgia, to explore ways to streamline and make equitable the use of public rights-of-way while preserving local control of and fair compensation for such rights-of-way. SB426 would authorize electric membership cooperatives (EMC) to supply and operate broadband services in rural counties with a population of 50,000 or less if the EMC secures a certificate of authority from the Public Service Commission. Access to broadband services and other emerging communications technologies is essential for communities to grow and thrive, and these measures aim to expand to such critical services to every corner of our state, and especially rural Georgia. 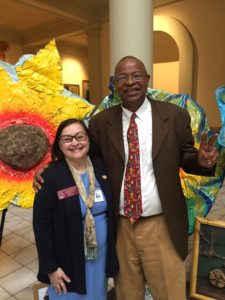 Thursday, March 29, 2018. Day 40.  Sine Die.  I was excited and apprehensive as I had no idea what to expect.  So many people had spoken about this day with awe and trepidation. Would I be able to survive?  What would happen?  How intense would it get?  Apparently plenty.

The morning began with a Democratic Caucus meeting to discuss upcoming bills and things to be on the lookout for.  After that I was able to enjoy some of the 2018 Environmental Legislative Day.  We had a number of organizations tabling and a fascinating art exhibit with works created from recycled materials.  My favorite was the Sunflowers by artist Alvin Fudge (http://sanctuaryartstudio1.com).  I was able to interview him about his artwork, which you can see and hear on my Facebook page. 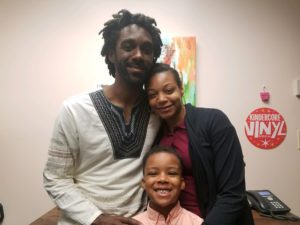 Then came a moment I had been waiting for all week – the time I could welcome two very special people to the People’s House – artist of the month, Broderick Flanigan and entrepreneur of the month, Beau Shell, better known as Lil Ice Cream Dude. 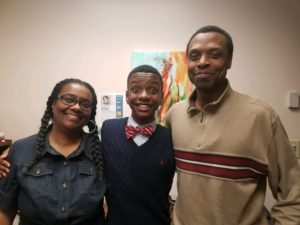 Rep. Jonathan Wallace and I gave a morning order to recognize them in the Gallery and then Avery Murdie, my chief of staff, was able to take them on a tour around the Capitol and my office before taking them to lunch at my request.  I am so proud of them both. 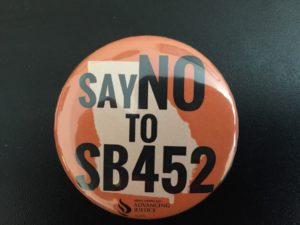 As a side note I had been working on a well speech to give in opposition to SB452 if it came to a vote on the floor.  Since we never know which bill will be called, a few of us made sure we were prepared.  Until 11:50 pm we held our breath every time a new bill was called for a vote in case SB452 was next.  I am so happy to report it never came up – seems there were not enough votes for it to pass (many legislators from southern Georgia were concerned about its impact on agriculture) and the sponsors did not want to risk another embarrassment on the floor. Thanks to everyone who contacted the committee chair, speaker, and their representatives in opposition to this bill.

We did pass some good bills on this last day including the 2019 Budget with a fully funded QBE – for the first time in 30 years.  That was thrilling.  We also passed a conference committee substitute Transit Bill (HB930, https://bit.ly/2CSkKRQ). 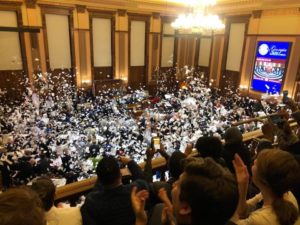 We ended “early” at 12:10 am, considering we went until 1:15 am on crossover day.  It was my first Sine Die and I enjoyed ripping the papers and throwing them up in the air with my colleagues.  It had been quite a session full of learning and legislating, fighting the good fight and doing what needed to be done.  It has been such an honor to serve during the 2018 legislative session and I’ll tell you a secret – I wouldn’t mind doing it again.  See you out in the District! 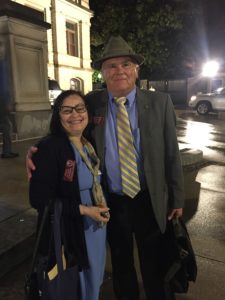 PS – I made a number of friends – across the aisle and across the hall. This led to a bittersweet moment when I had to say goodbye to Representative Bill McGowan.  Bill became a grandfatherly figure for me and always had the right piece of advice when I needed it – for example, once you vote, leave it in the past and move to what’s next.  There is too much to do to get caught up on what could have been.  I will miss you Bill (https://bit.ly/2s8RF4e). 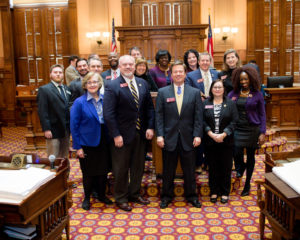 Although the Georgia General Assembly has adjourned sine die and the 2018 legislative session has officially come to an end, I hope that you will continue to contact me if you have any questions regarding your state government, potential new state laws or if you have any suggestions for future legislation. Over the next 40 days, Gov. Deal will review and sign or veto measures that received final House and Senate passage this session. Any bill the governor signs will become law, and any legislation not acted upon (signed or vetoed) within this 40-day period will automatically become law as well. 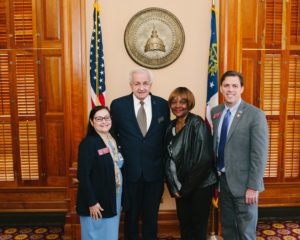 Do not hesitate to call or email me if you have any questions or concerns. My Capitol office is located in the Coverdell Legislative Office Building (CLOB) 509C, across form the Capitol, my office phone number is 404-656-0220, and I can be reached via email at deborah.gonzalez@house.ga.gov. My District Office is at the Butler Building, 337 S Milledge Ave., Suite 224, Athens, GA 30605.

As always, thank you for allowing me to serve as your representative.

Which reminds me – don’t forget you can keep up to date on what’s going on, who I am meeting with, what legislation I’m working on and other news by Liking our Facebook page: www.facebook.com/DG4GA.