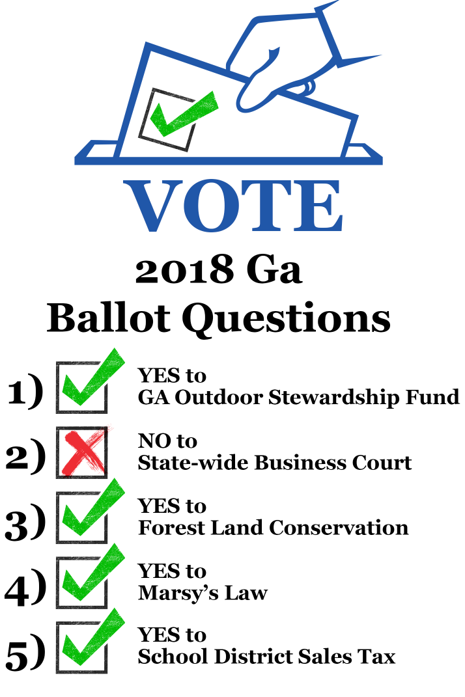 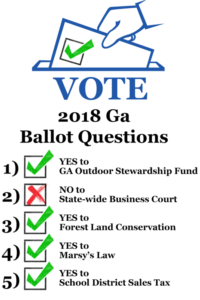 During the 2018 Legislative Session, there were five resolutions passed for constitutional amendments as well as two bills for statewide referendum questions. These amendments to the Georgia Constitution and statewide referendums will be proposed to voters on the November 2018 general election ballot. Below are the questions as they will appear on the ballot as well as summaries of each amendment. I also included my vote on them (if I was in session at the time they were voted on) and my rationale for why I voted that way.  They are presented for informational purposes only.

“Without increasing the current state sales tax rate, shall the Constitution of Georgia be amended so as to create the Georgia Outdoor Stewardship Trust Fund to conserve lands that protect drinking water sources and the water quality of rivers, lakes, and streams; to protect and conserve forests, fish, wildlife habitats, and state and local parks; and to provide opportunities for our children and families to play and enjoy the outdoors, by dedicating, subject to full public disclosure, up to 80 percent of the existing sales tax collected by sporting goods stores to such purposes without increasing the current state sales tax rate?”

A “YES” vote on this will ensure that up to 80% of the state’s share of revenue from sales tax collected on outdoor sporting goods sold throughout Georgia will go to the Georgia Outdoor Stewardship Trust Fund. The effort is projected to raise over $20 million annually over the next ten years and will be used to support and protect clean drinking water, Georgia’s beaches, wildlife, and natural areas; will support and protect natural resources with no new taxes or fees; will benefit Georgia’s economy through supporting Georgia’s $27 billion outdoor recreation industry. Georgia already has established goals of conservation and this would continue to align with those goals.

Although I generally do not like constitutional amendments, this is one I fully support. It does NOT add any new taxes. Instead, it just takes taxes already being collected and creates a secured funding source for our state parks and conservation activities. If you love going on hikes in our beautiful state, enjoy a picnic outdoors, if you like to fish, bird watch, or enjoy nature, this is one you can support too. One last note: this bill was co-sponsored by Rep. Spencer Frye (HD118).

First, I like the idea of accountability courts – courts that focus on just one area so they can be more efficient and effective. Second, I do understand that a lot of business litigation (lawsuits between businesses) can be complex in nature and with large amounts of money at stake. So, at first reading, this amendment seems like a good thing. However when I read the language of the bill a few concerns come to mind:

“Shall the Constitution of Georgia be amended so as to revise provisions related to the subclassification for tax purposes of and the prescribed methodology for establishing the value of forest land conservation use property and related assistance grants, to provide that assistance grants related to forest land conservation use property may be increased by general law for a five-year period and that up to 5 percent of assistance grants may be deducted and retained by the state revenue commissioner to provide for certain state administrative costs, and to provide for the subclassification of qualified timberland property for ad valorem taxation purposes?”

The resolution establishes a new class of property to be known as “qualified timberland property,” which is defined as tangible real property with a primary use for the production of trees to produce timber for commercial uses. The purposes of the new property class are to allow the Department of Revenue to appraise the properties and to establish a separate system to appeal appraisals and determinations related to qualified timberland property. There are over 450,000 private forest landowners and this constitutional amendment would support these owners and timber growers involved in the commercial timber business. It would also serve to try and protect and conserve Georgia’s forests. This amendment had an almost unanimous bi-partisan support in both the Georgia House and Senate and was also supported by the Georgia Forestry Association.

This is another amendment set to protect Georgia’s forests. When I first read it, I was concerned it would allow for the cutting of trees for lumber in places that was not permitted before. However, this only gives the property already in use for lumber a special tax designation.

“Shall the Constitution of Georgia be amended so as to provide certain rights to victims against whom a crime has allegedly been perpetrated and allow victims to assert such rights?”

Amendment 4, known as Marsy’s Law (SR 146), is the companion legislation to SB 127 and proposes an amendment to the Georgia Constitution to provide for the constitutional rights to the victims of crime. The rights for the victims are as follows: reasonable, accurate, and timely notice of court proceedings involving the alleged act; reasonable and timely notice upon the release or escape of the accused; inclusion in any scheduled court proceedings; and the opportunity to be heard at any scheduled proceedings involving the release, plea, or sentencing of the accused. These rights do not: create a cause of action against the State of Georgia; confer the right for a victim to appeal, challenge, or provide standing to become a party to a criminal or delinquency proceeding; nor restrict the inherent authority of the courts to maintain order in the courtroom.

You may have seen my Facebook post about my support for this bill. Though similar versions of Marsy’s law have been introduced in other states where they have been met with some questioning the infringement of the accused’s rights, the Georgia version has undergone significant revision and review to try and balance the needs of all involved. I supported Marsy’s Law this past legislative session after speaking with the ACLU and others to ensure that defendant’s rights would not be lessened in any way as we maintain the safety and dignity of victims beyond just being a witness. This constitutional amendment simply codifies what is already standard Georgia law and practice.

Sales and Use Tax Referendum by a School District (SR 95)

“Shall the Constitution of Georgia be amended so as to authorize a referendum for a sales and use tax for education by a county school district or an independent school district or districts within the county having a majority of the students enrolled within the county and to provide that the proceeds are distributed on a per student basis among all the school systems unless an agreement is reached among such school systems for a different distribution?”

A “YES” vote would change the requirements needed for an E-SPLOST (education special purpose local option sales tax) to be put on ballots. It would allow a school (or schools) with the majority of students in the district to request one without needing the approval or agreement of all other smaller schools. There have been incidents in the past where smaller schools have essentially held a larger school “hostage” by not agreeing to an E-SPLOST. The end result is that ALL schools would benefit as the proceeds of the tax are to be split between the districts based either on an agreement made between the districts or on a ratio of enrollment.

I voted: I did not vote as this was a 2017 bill and I was not yet elected. However the majority of Democrats voted Yes for this bill.

We have all heard of SPLOTs – these are special penny taxes that counties approve us to raise funds for a specific category of needs. Athens-Clarke recently passed a T-SPLOST for transportation. We currently have 180 school systems throughout the state of Georgia but only 159 counties. That means that some counties have multiple school systems.  For example, Jackson County has three: Commerce, Jefferson and Jackson County Schools.  It also means that Jackson County has three school boards. This amendment permits a school board to request a referendum to put to a vote to the majority of voters in their district for a penny sales tax to raise funds for all the schools in the district – county and independent.

“Do you approve a new homestead exemption in a municipal corporation that is located in more than one county, that levies a sales tax for the purposes of a metropolitan area system of public transportation, and that has within its boundaries an independent school system, from ad valorem taxes for municipal purposes in the amount of the difference between the current year assessed value of a home and the adjusted base year value, provided that the lowest base year value will be adjusted yearly by 2.6 percent?”

A “YES” vote supports the measure to provide a homestead property tax exemption in certain municipalities equal to the difference between the home’s assessed value for the current year and the adjusted base year value of the home. Referendum A adds a new section which allows a homestead exemption from the ad valorem taxes for municipal purposes in an amount equal to the amount by which the current year assessed value exceeds the adjusted base year value of the homestead.

The homestead exemption is available to residents of municipal corporations that are located in more than one county, that levy a sales tax for the purposes of a metropolitan area system of public transportation, and has within its boundaries an independent school system. Municipal corporations meeting this description are also exempted from the requirements placed on municipal authorities for notification of millage rate changes in subsections (c) and (e) of O.C.G.A. 48-5-32.1.

** A homestead exemption protects the value of a home from property taxes and creditors following the death of a homeowner spouse. 58 Democrats in the Georgia House voted “YES”. Only one Democrat voted “NO”. Also this only applies to Atlanta.

Tax Exemption for Homes for the Mentally Disabled (HB 196)

“Shall the Act be approved which provides an exemption from ad valorem taxes on nonprofit homes for the mentally disabled if they include business corporations in the ownership structure for financing purposes?”

The bill is trying to give a tax break to those who are providing financing for a home that will be used by disabled people, but without financial gain for the financer as an incentive. Referendum B proposes expanding the property tax exemption on homes for the mentally disabled to allow for homes which are indirectly owned by limited-liability companies (LLCs) to be included, if the LLC’s parent organization is a qualified 501(c)(3) organization under Internal Revenue Code.

I voted: I did not vote as this was a 2017 bill and I was not yet elected. However the majority of Democrats voted “YES” for this bill and it was co-sponsored by Rep. Spencer Frye (HD118).

When I first read this bill to find out more about it, my biggest concern was that this could be abused. As I looked at the voting history, however, it seems this was a bill that went through some revisions. The final version has a few items of interest that would make me vote FOR this bill.

** A homestead exemption protects the value of a home from property taxes and creditors following the death of a homeowner spouse. 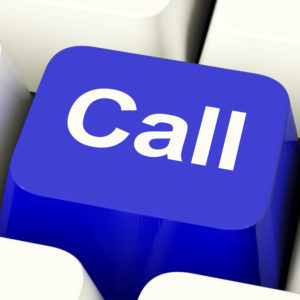 Two Action Alerts: Call Governor Deal to have him veto SB339 (Campus Free Speech Act) and SB336 (Secret Subpoenas & Fingerprint Bill). Phone: 404-656-1776
We fought against both of these bills this session – the first one because it would penalize students who protest on campus with suspensions and expulsions and the second because it authorizes the GBI to give sensitive biometric data of innocent Georgians to the FBI.
I have sent memos to the Governor on both of these issues. You can click and read them below.
SB336 MEMO GOV
SB339 MEMO